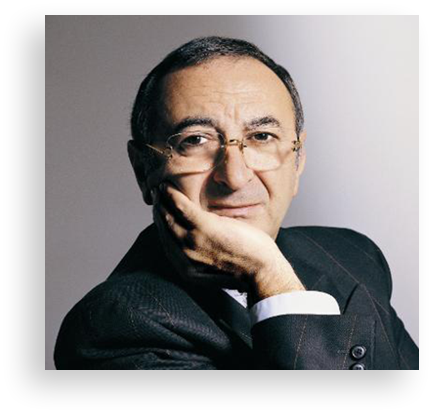 A man who ascended from humble beginnings in Tbilisi, Georgia, during the most intense period of Soviet Union control of the Eastern Bloc, Mr. Tamir Sapir would achieve legendary status in his lifetime as the quintessential success story and the embodiment of the American Dream. Mr. Sapir left the Soviet Union in 1973 amongst a wave of Jewish emigration seeking to create a better life for his young family, first settling in Israel and then migrating to the United States.

He began his meteoric rise in the business community by buying and mortgaging a taxi medallion in New York City and investing his life savings to open a wholesale electronics store on lower Fifth Avenue, which became an enclave for New York’s growing Russian community and for visiting Soviet dignitaries and trade delegations seeking to purchase state-of-the-art electronics.

A rising member of the local business community, in 1985 Mr. Sapir was invited to join a delegation of U.S officials and corporate members of the U.S.-U.S.S.R. Trade and Economics Council, the main East-West trade organization of the Soviet era. This council organized meetings between U.S. corporations and Soviet officials to improve trade. His participation allowed him to greatly expand his horizons and deploy his business acumen on a global stage. The connections and bridges he built between the business communities of the two nations in trade, allowed Mr. Sapir to become one of the major foreign partners for the emerging oil industry in Russia, where he found the next level of success for the better part of a decade.

Working with the same steadfast dedication that would be the signature of his life, Mr. Sapir understood at a moment in time that Manhattan real estate, significantly depressed by the early 1990s, was the future. In a market landscape where everyone was moving in the opposite direction, Mr. Sapir once again had a peerless understanding of value which would confirm itself over the coming decades.

He subsequently converted the success he had gained from oil and commodity trading into a real estate portfolio which would, at its peak, be one of the largest privately held commercial portfolios in New York City, owning some of the largest and most iconic structures in the American real estate industry. These included, but were not limited to, 11 Madison Avenue and 2 Broadway, buildings whose size alone places them in the pantheon of property at the absolute apex of Manhattan by square footage and irreplaceability.

Mr. Sapir was extremely generous and worked with the same devotedness in philanthropy as he did in the business sphere. He provided support and funding for Russian émigrés seeking to make America their home, and in this way helped to open the doors for others with origin stories similar to his own, to have a chance to achieve the American Dream themselves. A strong believer in the cultural preservation of his native Georgia, he was resolute in his commitment to helping other former Soviet Union immigrants get started in the United States.

He was a member of the Board of Directors of the Council of Jewish Émigré Community Organizations (COJECO), a UJA-Federation grantee, and the central coordinating body for Jewish émigrés from the former Soviet Union, for which he provided free office facilities to continue their mission. In 2000 he was awarded with distinction the Ellis Island Medal of Honor from the National Ethnic Coalition of Organizations. A great supporter of the State of Israel, Mr. Sapir significantly contributed both financially and through his connections with world leaders to its future.

Among his support for numerous charitable organizations, he also built the Congregation of Georgian Jew Synagogue in Rego Park, Queens, as well as synagogues in both Israel and Moscow. The reverberations of these contributions has and continues to influence the lives of the communities in which they have been established. Among the numerous awards, accomplishments, and accolades received in his lifetime, Mr. Sapir has left a legacy of both business and people. Through his family, and within the offices of The Sapir Organization, the view to what comes ahead remains a testament to his remarkable life and genius, and is the cornerstone of the successes attained and those yet to come.